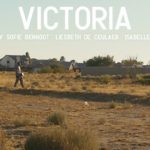 Filmotor has acquired the world rights excluding Belgium to “Victoria”. “Victoria” is a documentary directed by three female directors – Sofie Benoot, Liesbeth DeCeulaer and Isabelle Tollenaere and produced by an award-winning entertainment company CAVIAR with offices in L.A., London, Brussels, Paris & Madrid.
“Victoria” has been selected to Berlinale Forum 2020 where the film will be shown as a world premiere. Besides the film has just been nominated for Berlinale Documentary Award! 21 documentary films which celebrate their world premiere in Berlin from the sections Competition, Encounters, Panorama, Forum, Generation, Berlinale Special and Perspektive Deutsches Kino are nominated by the Artistic Director to participate, while a three-person jury chooses the winner.

In the Mojave Desert, not far from Los Angeles, lies the unfinished city of California City. Lashay T. Warren (25) left behind his turbulent past in LA to build a new life within this grid of thousands of crumbled streets.

Victoria introduces the viewers the “3rd largest” city in California – California City. In fact it is an empty mirage of suburbia in the middle of nowhere. This city was going to rival L.A – in 320 square kilometres of Mojave desert. About sixty years ago, an eccentric developer created “California City” in the Mojave Desert. He had a dream wherein he would raise a city like Los Angeles from the desert sand. Thousands of streets with water and electricity infrastructure were carved into the landscape and each of them was given a name. The city was ready to welcome hundreds of thousands of residents, but the anticipated amount of arrivals to the city was never met. And here Lashay T. Warren is settling up – a pioneer of the unfinished city.
Michaela Cajkova, founder of Filmotor on the film:

“I immediately felt fascinated with the project of California City – the endless city built in a desert! And I felt so much with the character and with the intimacy how directors get close to him and showed his life on such a place. It teaches us all that we can truthfully get to know ourselves in the emptiness far from the disturbance of cities we live in.”

3 female directors based in Belgium making one feature in California

Sofie, Liesbeth and Isabelle met at film school. Since then, they have been closely involved with each other’s artistic endeavours, taking on adviser’s or assistant’s duties during the process of making their films. On past projects, they spent many months travelling – together or separately – through the United States. The creation of Victoria, with the three of them co-directing, instilled a shared fascination for California City, as well as the urge to make a film together, to share a journey on a train of thought.
This is how they describe their fascination to California City and how they started to make the film:

“It started with an anecdote, a story picked up somewhere. About a city in a desert, California City, which hadn’t fulfilled its promise (yet) to become the third largest city in California. Driven by curiosity to this unfinished place, we ended up there together and found ourselves going back regularly during four years. In search of what our film might become, in this place always coming into being. We met countless people, stranded in California City. People who started over, seekers of gold
and fortune.“

Stay tuned for the trailer that we are currently preparing here in Prague and see you soon in Berlin at the premiere.